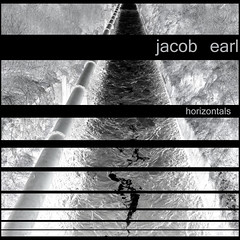 horizontals
Originally uploaded by jacob earl
after the crazy ride that was the compositions and recordings of my Incarnations and had we met in another life projects, i originally thought that i would take a break for a bit. but as usual, a new idea for a music project pops into my head, and i cannot ignore it. it's definitely compulsive.

this new one is a big, long extended serial project. it is called horizontals. it is about communication, normalization, socializing, language, words... it is about the building of a cultural lexicon. i am using the alphabet as a method of indexing and chronologically arranging the chapters. i've crafted many of the tracks already, and i will start releasing them soon. i think these songs bring my sound to a whole new realm of weirdscape, and i'm really enjoying it. check 'em out!

it has taken even longer than the last two EPs, but at long last i offer you my latest musical endeavour, we have lost contact.

i won't get into a big discussion about it right now; i think i have already mostly summed it up in a previous entry anyway. suffice to say that it is a companion piece to the first two EPs i released this year, the hoods, and old habits die hard. and i hope to release the three of them together as a limited edition 3 CD package, early in the new year.


i hope you enjoy! (and feel free to visit my homepage where i happily host these songs free of charge to you). also, remember my upcoming show at zaphod's, next monday (november 24th)! it's also free! free free free!

i just wanted to say, i found a leak advance of the new okkervil river album, the stand ins, and WOW. zowee. the perfect companion to the stage names.

more on that an other stuff later (including a really weird dream i had last night; remind me later to detail that more thoroughly, lest i forget).

the album is done. finito. hot off the presses, hot mixes. very little mastering was done. really only in the form of pre-mastering the mixes as i progressed. and a little compression in the overall render. i'm not a huge fan of post-production, can you tell? i polished off the mixes (and even laid down some last minute bass tracks) this evening. the mp3s have completed their journey via FTP to my website. very soon i will update my website discography page to include links to download all the new tracks (*edit 22:04: updating of the discography page is done; go download at your leisure and pleasure). FOR FREE REMEMBER! YOU PAY NOTHING. JUST CLICK HERE. mostly because it's fun, but you can give me money if you want; or support me in other ways, like come out and see me play (if i ever get off my ass and onto the stage again).

i thought i would cut-n-paste pieces of the 'blurb i wrote in my live space about the new album here as well for maximum album release coverage (haha). it offers some insight into the overall concept and the work that went into it:


in some ways, in reel time marks a real departure for me, from my typical songwriting and recording techniques and habits, and in other ways it is like coming full circle to how i began. i like this feeling that has been evoked in the production of this album, because it seems to fit conceptually with the themes of the songs, and the story they tell as a whole. the lyrics, though far from entirely autobiographical, are meant to convey a sense urgent juxtaposition between politics and relationships, between external and internal opinions. as such, the use of heavy imagery and metaphor relating to film, television, media, literature - and the very personal feelings that end up becoming attached to these indifferent and abstract devices - is very much intentional.

thematically, make believe was fairly self-explanatory in what it was about; questioning the nature and origin of our inspiration to feel that there is meaning to life; and remaining faithful to a solipsistic ideal: that everything around us (me) must just be a dream, a fabrication of the imagination. in reel is the logical counterpoint to the thesis that make believe posed: that is, that the physical world around us - and our interaction with it - is very real. it creates our memories and feelings, and contributes to our assignation of something or someone's emotional importance. when that something or someone is gone from our life, we feel loss and can continue to feel loss long after it happens, because memories have been carved out to be triggered by sensory input from film, tv, literature, other media, etc. nostalgia brings the emotion back.

the circular nature of memory vs. the linear nature of time moving forward: it got me thinking about a film reel or a tape reel, and how it must turn around and around to keep the story going forward. and even though it seems current because you're experiencing it in the here-and-now, in real time, it was actually recorded in the past, sometimes a very long time ago. really, you're just reliving a memory. and i guess that became the concept of the two albums i wrote and recorded this year. in reel time completes the circle that make believe began.

AND just 'cause you're all special and i want to be loved and showered with admiration (or scathing critique, 'cause feedback - even negative - is still better than nothing), i've directly linked a couple of tracks above for immediate gratification (for those who can't bother to take the two seconds to visit my website). anyway, you're all great for caring enough to even read this far. thanks to all the people in my life who have supported and listened this far, and hopefully keep on doing so. it's terribly humbling, and therefore keeps me suitably grounded.

so if all goes according to plan, i will be uploading the new album this evening.

in other news, i wish i could hibernate through this season.

yeah, i gave up on nanowrimo. around mid-way through the month. i got a little over 20,000 words written. oh well. it was a good first try, and that's more words than i've ever written as one body of work. so maybe it'll see the light of day one day, just for the fun of it.

i had to do it. i've been far too busy with completing the new album, in reel time. it is my artistic priority right now, since i've made a firm commitment to myself (and anyone else who might be anticipating this thing, haha) to finish it before the end of the month. in fact my tentative release date is december 04th. that's only 8 days away! will i make it? at the rate i'm going, the chances are good.

so far i am making good schedule in the tight timeframe i have left. i have been working diligently on the mixing (levels, effects, and other general pre-mastering polish), as well as adding some new guitar / bass / vocal tracks here and there. i am fairly pleased with some of the acoustic guitar and vocal tracks.

more importantly, i have recorded 2 new tracks, meaning the album will in fact have a total of 12 tracks, not the original 10 reported. more musical fun for all! this will make in reel time the average length of most of my albums; around 1 hour. this addition is quite exciting for me, because these 2 songs came out quickly and suddenly, and seemed to fit the concept so well; indeed, seemed to be exactly what was missing, and nagging at me. the story seems complete now.

one of the tunes is a previously recorded older tune (written in 2000, recorded in 2001-2002 for my tigers album) that i have been wanting to rework and re-record for some time. it is a song that was regularly featured in my live sets back in 2002-2003, and i've wanted a better produced recording of it for years. it worked well for the timing and theme.

the other new tune is brand new, never heard, though i did write the lyrics in late 2005. i sat on them for a couple of years 'til the time was right to put music to them. and so it came.

this all required a reworking of the album tracklist, which i will post to my live space blog in the near future.

as is customary, this new album will be released on my website for free download from the discography page. visit and download free music! all my mp3s are free! i've been doing it since before it was a glimmer of an idea in thom yorke's eye.

other than that, what's new? in a nutshell; saw the new beowulf animated movie, it was pretty good, saw the reverb syndicate cd release party on saturday, it was awesome, and i've been listening to lots of great new music and thinking about what will ultimately hit my best of 2007 list.

well i did it. i got a little inspiration this weekend, and laid out the composition and arrangement for the final song for the new album. i recorded it today, and it sounds so nice i don't think i even have that much mixing left to do on it. i wish all my songs got recorded with so little effort. so all ten songs are now in a state of near completion.

i have decided on a final tracklist, and i will post it to my live space journal momentarily.

the cover artwork is done too i think. i don't think i'll alter it anymore.

all i need to do now is lay down a couple of vocal harmonies, finish mixing and mastering the overall levels, and i'm done. give me a few weeks and i'll release the mp3s on my music page on my website.

in other news, nanowrimo is going well; i have 4290 words so far, and plan to do some more writing tonight before/during/after dinner. the working title of the nanowrimo novel is Nobody. if i end up liking the end result, i may publish it on my website. cheerio.

apologies for not writing in awhile, things have been hectic, and real life has preoccupied much of my time, leaving less-than-usual procrastination time for internet dawdling.

news, in a nutshell:

whew. i expected to be more brief than that. so you got a bonus. until next time...
Collapse