i didn't go running today. because i'm a lazy bum. actually, i woke up feeling queasy and woozy and achey, and felt like that for the rest of the day. i feel mildly better now. but i was worried about whether i was coming down with something, or perhaps ate something that disagreed with me. i don't know. but i did some crosstraining walking instead.

i bought some groceries today.

i had salmon with vegetables and rice for dinner.

i picked up a vinyl copy of broken social scene presents: brendan canning - something for all of us... it came with a free mp3 download of the album, so i am listening to that right now. very enjoyable. i have always been a fan of brendan canning's singing/songwriting/bass-playing, and this is no exception. the album does not disappoint. and i think it's a slightly better offering than the kevin drew album.

i almost bought the new calexico on vinyl too. and i'm still waiting on the new okkervil river to come in on vinyl. the cd was released on tuesday. why are some vinyls released so much later than the cd? damnit.

i also found a great buck 65 album from 2007, heck. i think it's a mixtape. it has a great "film noir" version of "kennedy killed the hat". plus awesome guest artists like jorun and mr. dibbs.

do you know how i ache? it is awesome. today was my sixth run.

sixth run! pushed myself furthest this time (so far), running 90 seconds at a time instead of only 60 (actually, i started off with a 2 minute stint as my first rep). it was the hottest day i have run yet (25 degrees), and i got my best time so far; 14:09.16 minutes!

holy moly, at around the 11 minute mark i honestly thought i was going to collapse. not from heat or exhaustion or passing out, but from my legs crumbling beneath me! they felt like putty. it was hardcore. i feel i pushed myself to my upper limit so far, just within reach of going overboard. i hope i don't ache too much tomorrow.

so that's the end of running week two! i suspect i will sleep well tonight.

the new calexico album, carried to dust is really really good. i especially like "two silver trees", which i remember them playing at bluesfest.

also not too bad is the new verve album! yes, after 11 years, the verve has a new album out, entitled forth (actually, it comes out on monday). it's remeniscent of their earlier material, and evokes a mood of '80s brit and '90s shoegazing. it has moments of joy division and stone roses. slightly derivative, but on a whole quite a surprisingly good comeback (not nearly as good as james' comeback, mind you).

so now i have a bit more time for a further and more elaborate update on what's new in my life this week...

as mentioned a few hours ago, the new okkervil river album is pure awesome! it will certainly be a tough call to determine which 2008 release is better: shearwater's rooks or okkervil river's the stand ins. certainly they will both make my top 5 when i eventually compile my list of favourite albums of 2008. and i'm really looking forward to seeing okkervil river in montréal in october. so what does the new album sound like, you ask? kinda like a mash of black sheep boy and the stage names, with a bit of throwback to '80's pop (particularly in the bass lines). it's a definitely well-formed sister-concept to the stage names. i really admire will sheff's songwriting, both lyrics and musical composition. and i love the equally mellow and crazy extremes of emotion and sound. lots of nice crescendos, lots of lush orchestration. favourite tunes on the new album so far are "lost coastlines", "starry stairs", "pop lie", "calling and not calling my ex", and "bruce wayne campbell interviewed on the roof of the chelsea hotel, 1979". but oh heck, the whole album is great as a solid concept piece, much like the stage names. it's very cohesive. impressive.

another advance leak i found is calexico's new album, carried to dust. i will report back on that when i listen to it more, but so far so good. mellow. i like mellow. and characteristically calexico, so if you're already a fan, it's what you've come to expect from this great band...

also, i just bought bon iver's for emma, forever ago on vinyl. it's even better on vinyl! that goes without saying for most good albums though...

and, as not mentioned earlier, i have entered a running event! the cibc run for the cure on october 5th. i've already yielded $200 in pledges! i'm hoping i can run the 5 km, because the 1 km seems kind of wussy. this will be my first event! very exciting. you can pledge me if you want. :)

today i bought a tent and sleeping foam roll for camping out after the wedding on saturday night. that will be fun.

oh yeah. my dream last night. that was weird. i was at a party or get-together or something, with some people i knew in real life - from all periods of my life, some that i haven't seen in years - and people that were not real, who only existed in this dream. and i was talking with one of these imaginary people, a young lady, and she seemed so familiar. i knew her in the dream, i knew her enough to not have to bother introducing myself, and thus i never heard her say her name. we got into a conversation about body modifications, and i felt like an amateur with merely a few piercings and some tattoos. she was keenly showing me her scar art. she had an odd sort-of-tattoo on the back of her neck with deep rich colours that looked incan or mayan, and it was accented with a hole on each end, creating a tunnel under her skin - under the tattoo - that looked like a pencil could be inserted through. and then she showed me her back, on which was scratched/scarred the word "Bleeder". i was telling her about my plans for my upcoming tattoo. there were other weird things going on to, but that was the main thrust of the dream. 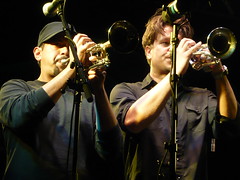 calexico @ bluesfest 2008
Originally uploaded by jacob earl
as mentioned, i took tonnes of great pics of calexico at bluesfest. and now i've uploaded them to flickr; enjoy.

i'm ichy sicky, which is sucky because i want to be enjoying the good weather on the weekend. ah well. instead, i will try to be productive by getting some mixing and mastering done (i'm really dragging behind my self-imposed timeline on the new ep, but i hope to release it next week; certainly i want it finished before the end of july, since i've already started working on my 3rd release for 2008).

that is all for now. enjoy your saturday.

fitting to the subject of my last post, roka was the first song played at tonight's show. what a blast! calexico are an awesome band to see live. i highly recommend them to anyone! i am so glad i went, even though it means getting to bed a little later than usual. a small sacrifice for a great show.

i took tonnes of pics, but i'm way too tired to upload any of them to flickr right now, so i'll hopefully have time tomorrow (unless of course my evening is filled up with other events; i'm planning on adopting a cat friend for aggie tomorrow after work, and then i might go to bluesfest again to see the black crowes).

well, i'm off to bluesfest (alone), to see calexico. maybe if i'm lucky i'll see people i know. either way, i'm off to enjoy some blissful live music (and hopefully snap some good pics too).

even though bluesfest did not want me as a volunteer, i will not hold it against them.

i have my ticket for july 9th, to see hayden and calexico (and maybe i'll try to catch some of brian wilson too, even though he's on at the same time as calexico, according to the schedule, which is a sad conflict indeed).
Collapse