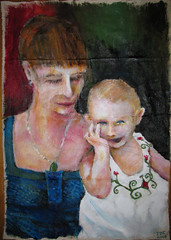 Jen & Lily
Originally uploaded by jacob earl
i had a busy and fun-filled weekend. friday evening i was delivered an impromptu invitation to a house show, featuring krista muir (aka lederhosen lucil) and shane watt. thanks to

audrawilliams for a swell evening... i love the intimacy of a house show. the music was great, there was plenty of raucous sing-a-long, and i got to chat with both krista and shane after the show. quite the enjoyable social night, overall.

saturday, i spent all morning and afternoon painting. see?! i painted this portrait for

qeonos, for her birthday. that was last night. we all had pizza at her place, then went karaoking at shanghai. it was amusing. i sang sit down by james. it was packed! holy popular place to be on saturday night, batman. a good time was had by all.

today i slept in, then did laundry, bought some groceries, made myself lemon pepper catfish and potatoes for lunch, watched some episodes of supernatural, and went for a 2 km run. i ran the whole way, and finished in 12:04.81 minutes. not bad.

in music news, the new snow patrol album, a hundred million suns, sounds like slicked-over poo. too bad they peaked at final straw, and have been grasping at straws ever since. i blame over-production and marketing. ah well.

as a saving grace, the new bloc party album, intimacy - which i wasn't expecting too much from based on the mercury single - is surprisingly good. much more like silent alarm than a weekend in the city, as if they are taking a nod from all the remixes that were done by futureheads, death from above 1979, m83, four tet, etc. anyway, the end result is a diverse and catchy album that is really percussive and rhythmic, but also a splash of '80's electra-cheesh, à la duran duran. 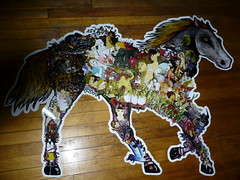 quite apart from the fact that the album is a musically stunning journey of grooviness... LOOK AT THIS! this is some crazy artwork, yo! if the mainstream big labels were still releasing albums like this en masse for all their artists, maybe they wouldn't be facing the kind of dismaying record sales they are, and blaming it on "pirating" by the consumers. give us something worthwhile to consume, and we will gladly pay for it! i happily paid $29.99 plus tax for this. totally worth it.

in less happy news, i am still feeling crappy and under the weather. ten days now! enough already! i had to leave work early yesterday, and stayed home today. blech. i'm blowing my nose every 30 seconds... ichy green stuff. so much gross phlegm. i know how much you want to know this.

i really NEED to feel better tomorrow. you see, tomorrow is my first of four tattoo appointments for my big back piece with Julian at five cents tattoo. i booked this appointment four months ago; there is no way i'm cancelling! i'm stoked to get inked again. it's been about nine years since the last time i got a new tattoo.

lastly - for now - i think i have decided on my next camera. after much research, i am very impressed with the pentax optio w60. 10 megapixel, 5x optical zoom, and 1280 x 720 video with audio! not to mention that it is waterproof, dust-proof, and cold-proof to -10 degrees celsius. hardcore. i might even pick it up this weekend if i have enough cashola left over after my tattoo work tomorrow...

i started running, which is great, and i am completely resolved to keep it up.

last night and today i was feeling inspired and artistic, so i got some new music recorded (that's three new songs already; the third ep is well on the way). i also worked on some art projects i have on the go. and i got grocery shopping done for me and the cats. and i made homemade soup for dinner. i'm multi-tasking all over the friggin' place.

i even did some dishes and took the garbage out today. like, i'm on a roll.

so while i'm contemplating what indulgent purchase i should save up for first (i'm thinking the new camera; i still have to do more research on what kind of monitor i want, and the wii will take a bit of saving up for, and i haven't decided exactly which amp / fx processors i want), i decided to satisfy myself with small indulgences this week. that way i will save up the remaining money 'til next month, and then maybe i'll have a big chunk of cash free all at once.

so tonight i purchased my indulgences for the month; 2 new dvds (lost in translation, and shaun of the dead, both on sale), 4 new drawing pens ($3.19 each, yowzers), 2 new cds (my morning jacket's evil urges, and bonnie 'prince' billy's lie down in the light), and a big box of junior mints.

also, yesterday, i bought a couple of used books; john irving's the hotel new hampshire and robert heinlein's the cat who walks through walls. i look forward to reading those when i am done reading until i find you (which, incidentally is completely breaking my heart, and simultaneously making me want new tattoo work done; that is a whole other complicated story deserving of a post entirely unto itself, so more on that later).

re: bonnie 'prince' billy's new album; it's awesome, but then, i expected that.

re: my morning jacket's new album; wow! what an interesting tangent for them. jim james is no longer the only one singing! the rest of the band joins in on vocal duties in a lot of places throughout the album; very interesting. some very pretty compositions, very nice harmonies. the tones and grooves are still signature mmj. all around, a great offering from them, sure to make my best of 2008 list.

other fantabulous new music i've been enjoying lately: bon iver's for emma, forever ago. listen to it now, fools! you'll thank me. it's too pretty not to share.

i have been attempting to place emphasis on productivity and positivity in my life. so. instead of moping around feeling like a broken lens on autofocus [which i am clearly overqualified for], i have been creating new machinations, mostly in secret, but displaying and portraying them to the public-at-large every once in awhile. i have recently painted, and written & recorded new musical & lyrical material. and of course, i am taking great pains to keep my virtual creative profile high, while not living my entire life on the internet [a balance i may not have successfully struck quite yet; i suppose time will tell].

this is by no means a disclaimer, but you can use it as one if that suits you.

what else is new? stephen colbert is my current non-fiction hero, and radiohead.live.montreal.2006.06.10 is my current short-term goal.

[my long-term goal is still to become a luthier and study animal behavioural science in my free time].

maybe it was all imagined in my head all along. it's not as if a huge number of people ever expressed any strong interest in anything artistic that i have done. is this what an identity crisis feels like? i feel like a character in a monica hughes young readers' book; forever trapped in the self-effacing, gawky shyness of teenagehood in some futuristic, dystopic fantasyland. i'm a teenage boymind trapped in a thirty-year-old manbody. i still have starry-eyed daydreams of getting-rich-quick, and becoming a famous rockstar. but every day simply reaffirms the banal reality; i'm the modern day equivolent of a white-collar pencil-pusher, i will retire at 57, after giving the best thirty years of my life to a corrupt and broken institution whose values i don't truly espouse, and i will very likely die a few years later of a heart attack, having never really lived life for me. whatever that means. 'cause i don't think i could go along with life very contentedly if i didn't have something | someone to live for and tend to. i must be experiencing panic of the purposeless.
Collapse