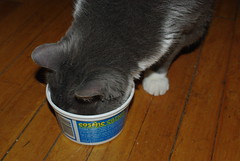 aggie loves catnip
Originally uploaded by jacob earl
the weekend has been a nice, slow stupor. somewhat relaxing, lazy, not very eventful. aggie and relic got loaded on catnip yesterday. they are two hilarious goofs when they are not being total sloths.

seamonkey_mags! we went out for shawarma for dinner, and then to the movies to see fantastic mr. fox, which was a very enjoyable movie.

if you don't already know this, i feel hit-and-miss about wes anderson. mostly, i don't enjoy his movies for one reason or another (could be that i think owen wilson is usually really annoying). the darjeeling limited was really good, largely thanks to adrien brody and jason schwartzman. and again in fantastic mr. fox, schwartzman shines, as do bill murray, george clooney, willem dafoe, and jarvis cocker. really great cast. the animation was superb, and so was the score.

yesterday we went to the craft fair at the jack purcell community centre. we got some gourmet chocolates; eight for $12.95! yowza! but worth it. i really liked the peppermint and chili flavours. and i'm not even usually much of a chocolate fan...

i'm planning to make a ground beef and pasta casserole for dinner; do you think this is a good idea? obviously, i'm going to put cheese in it. what else should i put in it? 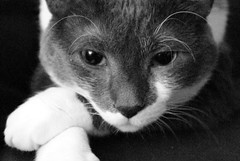 agamemnon in b&w
Originally uploaded by jacob earl
look at that handsome boy! agamemnon can sure be cute when he wants to be.

i think it's been about five weeks since i last posted. apologies. life has been busy.

seamonkey_mags has been home for over a month now, and we've settled in together nicely. it's awesome having her here instead of 900 km away in nova scotia.

we went to montreal a couple of weeks ago with shaun, to visit

sigmasix and my cousin, and to do some shopping and take in a concert. despite it raining almost the whole weekend, we had a lot of fun.

work is busy, but i have passed a pre-requisite stage of a competition i applied for. this is good news. could mean more money and a better work location (closer to home) for me.

i'll post a few more new album reviews soon. i have already started compiling my best of 2009 list, and given some serious thought to my best of the decade list.

aggie's middle-of-the-night 3a.m. crying has become pretty much a ritual now. almost every night he wakes me at some point with his morose-sounding "raoouuulll, raaooouuulll". usually i can just tell him to be quiet and he eventually settles down and gets back in bed, or goes and lies down on the couch. but sometimes he keeps pacing and meowing. either way, i rarely sleep through the night. i wonder if he is also lonely and depressed. i've been thinking that maybe he needs a brother or sister again, to keep him company. and so i can get a decent night of sleep.

even when i'm so stuffed up sick that i look like i have a gin blossom, agamemnon still loves me. mayhaps because he's so much more handsome than i, and thusly (and correctly) thinks i make him look good:

today is the fifth birthday of agamemnon and bob, the two male cats of my household. yesterday as a birthday treat i gave them fresh catnip; something they probably haven't had in over a year. they went CRAZY playing with me, their toys, play structures, each other, i got some great pictures, and then they fell fast asleep for hours. it was awesome. except for the part where bob scratched up my hand trying to jump up and grab the catnip. he's so impatient. anyway, many great pictures of agamemnon and bob [and our girl cat, zsuzsi] exist on my flickr page. in the near future i will upload some photos of aggie and bob going crazy with the catnip.
Collapse